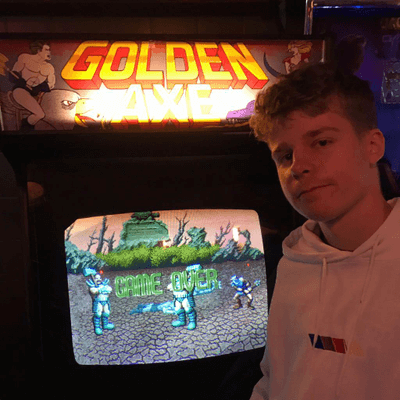 After dropping out of university, Harry went back home and found a gift: a fake big tweet from Federer. That’s when he came with a business idea: fake tweets printed and sold for £30. He partnered with a friend and launched the project within 2 months. However, after a Youtube’s influencer campaign, the site got 17,000 visitors and only 20 sales. That’s when they realized not so many people were interested in their product...

Hi Harry! What motivated you to start a business?

Well, I’d just left university. I “studied” Economics and to be honest though the whole thing was a complete waste of time. I had no interest in sitting in a suit and bullshitting about Macroeconomics for my next 50 years.

So I started learning to code. Began with Code Academy, then I found the Net Ninja, Wes Bos, Level Up Tuts who taught me pretty much everything I know.

I’ve always been a big believer in real-world experience. There’s “blog post knowledge” and then there’s “DIY” knowledge. One thing is watching a Wes Bos copying some code and another is getting out there in the real world and doing it yourself.

So that was the reason I started my first business. Real coding. Real experience. Real money. I just needed an idea...

Well, I’d got back from university, arrived back at my parent's house and there were these huge canvases hanging on my bedroom wall. My friend Giles bought them for me as a gift for finishing my degree.

On the canvases were tweets from Roger Federer and David Luiz. Originally it was pretty surreal, “What, has Roger Federer tweeted me!”

I realized they were fake when I noticed that Jeremy Corbyn, Theresa May and Donald Trump had liked them. But I still, it was a really thoughtful gift.

I just got really excited by these canvases. So I thought this is it. I’m going to try and build a website which allows you to write up one of these custom tweets and purchase them as canvas prints online.

Well, funnily enough, I’d just done Learn Node by Wes Bos so I built the whole thing in Node and Pug which was the stack Wes used. This took me about one and a half months.

But unfortunately, that stack fell down at the final hurdle. I couldn’t get the text on the editable tweet to go blue when someone used a # or @ key. So I started from scratch. Did another Wes Bos course, React for Beginners course and built the whole thing in that which took me another month.

At the time I thought this made sense. And that the site had to be perfect. Wow, how wrong I was. Looking back now converting the whole site from Pug to React purely for this blue text effect was a really really awful idea. I just naively had it in my head that things had to be perfect.

At that time I didn’t have anyone there to say to me, “Oh, by the way, you definitely shouldn’t change the whole codebase over because of some inconsequential highlighting problem. Look at the bigger picture.”

And when it’s just yourself making decisions in a vacuum your mind can play tricks on you. I just wanted it to be perfect.

Whilst I was building the site my co-founder Giles was sorting out suppliers. I think he just called up about twenty printers in the UK and American and claimed he was starting some venture capital canvas company so he persuaded one or two to offer discounts.

So about two months later I’d finished the website and we were ready to go. I posted in on Product Hunt and it got an initial burst of traffic. But slowly and surely the traffic was drying up and we realized we needed to do something a bit different.

Thankfully my co-founder Giles had come up with an idea. He said we should post our canvases to YouTubers around the world who do this thing called “Mail Time”. Now, “Mail Time” is a type of video where YouTubers open fan mail and show it off to the camera. So we thought, this could be a wild way to get our startup some exposure.

We found ten YouTubers who did regular Mail Time videos, wrote ten funny tweets, printed them off as A1 Canvases, and shipped them to their PO boxes around the world.

A couple of weeks passed and a YouTuber called Chilly did a MailTime video and opened our canvas on camera. She was so impressed by our gift that she gave a free shoutout to our website in the description and even pinned my comment. This video ended up getting 3.3 million views.

Next up, this Youtuber called Sodapoppin does a MailTime and opens our canvas. That video got 400k views.

In terms of why it worked, I think it was all the little details we went to.

Whilst most companies sending products included formal letters and sleek packaging we did the complete opposite. We bought glitter, fancy cards, bubblewrap, Christmas wrapping paper, and hand wrote personal letters.

This certainly bought us goodwill with the YouTubers who were more than up for shouting out our product.

Which were the causes of 140 Canvas failure?

So we got 17k people to the landing page from our YouTube promotions and we’d thought we’d hit the big time. Amazingly, only converted 20 or so converted to actual sales. So it doesn’t take a genius to work out that there was a problem with the landing page.

It wasn’t badly designed either but I just think the product was too complicated.

If you on onto the landing page to try and purchase a tweet, you’ll see that you have to actually write the tweet yourself. There was no template’s you could buy.

From our analytics, we saw a lot of people click on the box but and never make purchases. I think the actual act of coming up with an original tweet was too much effort.

I confirmed my suspicions here when I saw Framed Tweets pop up. It’s a similar concept, but they allow you to just purchase default tweets. For example a funny Kanye West tweet. According to a Starter Story article they’re making> 300k / year.

I wouldn’t have done anything upfront. Instead, I’d have gone out into the market and checked there was actually demand.

I spent two months designing and redesigning the website, Giles had spent time negotiating print discounts with suppliers in America and the UK, We had a nice logo, we printed stickers, we ticked every box, but none of that really mattered…

Because we never took the time to validate the product. And that’s why despite getting all that traffic we had nothing to show for it.

There’s a cool story about Patrick McKenzie (@patio11) where he talks about going directly into hair salons, paying for appointments, just to talk to the hairdressers and try and figure out if there’s demand for a barbershop booking service.

We basically should have done the equivalent of this. Perhaps, went back to our old school with a couple of demo canvases, talked to the kids, see if they understood the product, see if they were willing to pay £30 for it, whether they even used twitter, or understood the concept.

‍Which were your expenses? Did you achieve some revenue? In the end, how much money did you lose?

The YouTube promotion must have cost about £250. That was pretty much our only cost. Well web and domain hosting might have been another £20.

We must have sold about 25 canvases in total. Profit on each canvas was about £5.

So we probably lost about £145 in total.

But I like to look at it like this. 2 months time and £145 loss is really not much for the lessons it taught me. Some people spend a couple of years and hundreds of thousands for the same lesson,

This failure taught me all the fundamental lessons:

Unless I can validate a project upfront, build the MVP in a month, and know how I’m going to get my first 100 users, I’m not going to start a new project now.

‍Pieter Levels has a very no bullshit attitude to startups which I like. I’m also inspired by the lifestyle of Vincent and Marie who are building Threader. They left Paris and just started traveling around doing their own thing at their own pace. They kinda said “fuck you” to what society said that they should be doing so that definitely fuels me.

I also think people could learn a lot from Tyson Fury and Kanye West. Not only are they both superb self-promoters but they’re also out there, two unshackled minds, playing in the sandpit, living their best life.

And I think we’d all benefit from a dose of that.

And as far as tools go, I use Sketch for Design and VSCode to code.

Funnily enough, I’d say the most inspiring bootstrapper tales you can read is one I wrote myself haha!  It’s called The Kanye Story. It’s the story of how I went from lying in bed with zero ideas to negotiating with the biggest superstar on planet Earth!

Failory's Recommendation: Check out this talk from Harry on how to validate startup ideas, where he talks a little bit about 140 Canvas' story and what he did different in his next startup, The Kanye Story.

I’m currently working on Marketing Examples. A gallery of real world marketing examples for all the marketers out there.

There’s some great advice Naval Ravikant once gave: “Build the product only you can build.” And that was the driving force behind Marketing Examples. “What are my unique talents, what can I make that no-one else in the world can. Even if they tried. Even if they had money.” And this is what I came up with.

The Marketing Examples Twitter account is also worth checking out. I distill each example into a simple easy to digest thread. And I tweet a more freely about how to unprogram yourself on my personal twitter.