Raising $300K to Build the Lambda School for LATAM 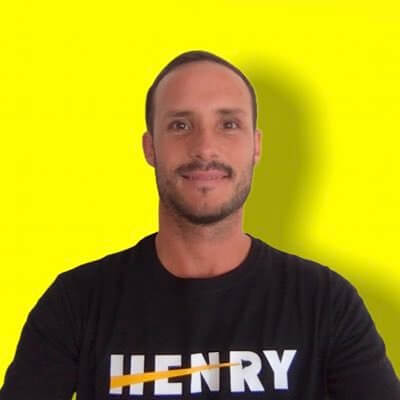 Raising $300K to Build the Lambda School for LATAM

Martin is one of the co-founders of Henry, a startup that teaches software development for free, helps their students get a job, and gets a share of the student’s income. They have recently received $300k from Y Combinator and they aim to have taught 100,000 developers by 2025.

Hi Martin! Who are you and what are you currently working on?

I’m Martin Borchardt, CEO and one of the co-founders of Henry, a LATAM startup that teaches software development for free and helps students get a job, in exchange for a share of their future income.

Before building Henry, I founded a FinTech startup called Nubi, which is a cross-border payment system that integrates with PayPal and TransferWise.

While in Nubi, I found it really difficult to hire developers, basically because there is a lack of talent in the market. A lot of people are still more attracted by the typical careers of the 20th century (law, journalism, etc.), rather than computer science. Henry surged as an attempt to solve this problem of the market.

The first solution I came up with consisted of a company that gave people loans so that they could afford studing engineering. We gave 26 loans, but the company soon failed, mainly because of three things:

So I did a pivot and decided to build the Lambda School for Latin America. Lambda School is a famous school in the US that trains software developers for free and helps them find a job in exchange for a share of their future income.

Henry has the same model. Once the students get into our program, they learn web development, and once they get a job, they start paying 15% of their income until they reach a max cap of $4,000.

We are super proactive with getting the students a job because we basically don't make money if they don't get one. Our incentives are aligned with the student. More than 90% of students that got a job are because we’ve introduced them to the company.

To validate the idea, we created a Wix website which had a Typeform survey for people to apply to the program. From day one, I think we had around 100 applicants. From there, we grew for a couple of days sustainably 100 applicants per day and after a couple of months, we started growing 20% a month.

The way we managed to get these 100 people was mainly through 4-5 posts we made on my Twitter and LinkedIn profiles. We also did some Instagram ads which worked really well.

My advice is to build your business idea as fast as possible and launch it to market so as to test your assumptions. There're a lot of entrepreneurs that are six months building a product without getting any feedback from customers just to find out that, when they launch, the reality is very different to what they were expecting.

Right from the beginning, the differences between this new idea we launched and the student loan company, were very clear. The student loan product was very unattractive from the customers’ point of view, due to Argentina’s high inflation. The new version, instead, was zero-risk for the student, as they only had to pay if they began making a big income.

I was completely new to Income Sharing Agreements when we launched Henry, but I was open to pivoting to another business model. I always advise entrepreneurs to focus on solving a problem, and not on the solution itself.

Which were your marketing strategies to get people to join?

We don't have a big problem in terms of student acquisition, because it's 100% digital and is zero upfront cost, making it very easy and tempting to apply.

Once the first students began to get jobs, they started spreading the word. Nowadays, a lot of people that comes into Henry is because a friend or family member has already passed through our program and has had success. Unfortunately, we can't accept everyone because our resources are limited. That’s getting more difficult every month as we have more applicants.

I think that the net impact of COVID-19 on Henry has been positive. Despite some companies (for example those in the travel industry) have stopped hiring software engineers, many others have kept hiring as they have had to digitize their operations or because they weren’t affected by the pandemic at all. Also, we teach people 100% remotely so students have been able to keep learning why staying in their homes.

We’ve recently received a $300k investment from Y Combinator, which was a great achievement.

We were accepted on Y Combinator’s Summer Batch, which is a 30-day program where they help you grow your business’ KPI 20-30%. The program ends with a demo day that gives you access to a network of more than 2000 investors from around the world. I’d say +70% of startups of Y Combinator Batch raises money there so chances are very high.

As for goals, we aim to have taught +100,000 developers within the next five years.

Also, we’re thinking about launching a data sciene career in 2021. Many students are demanding it. However, the demand from businesses for data scientists is much lower than the demand for software developers.