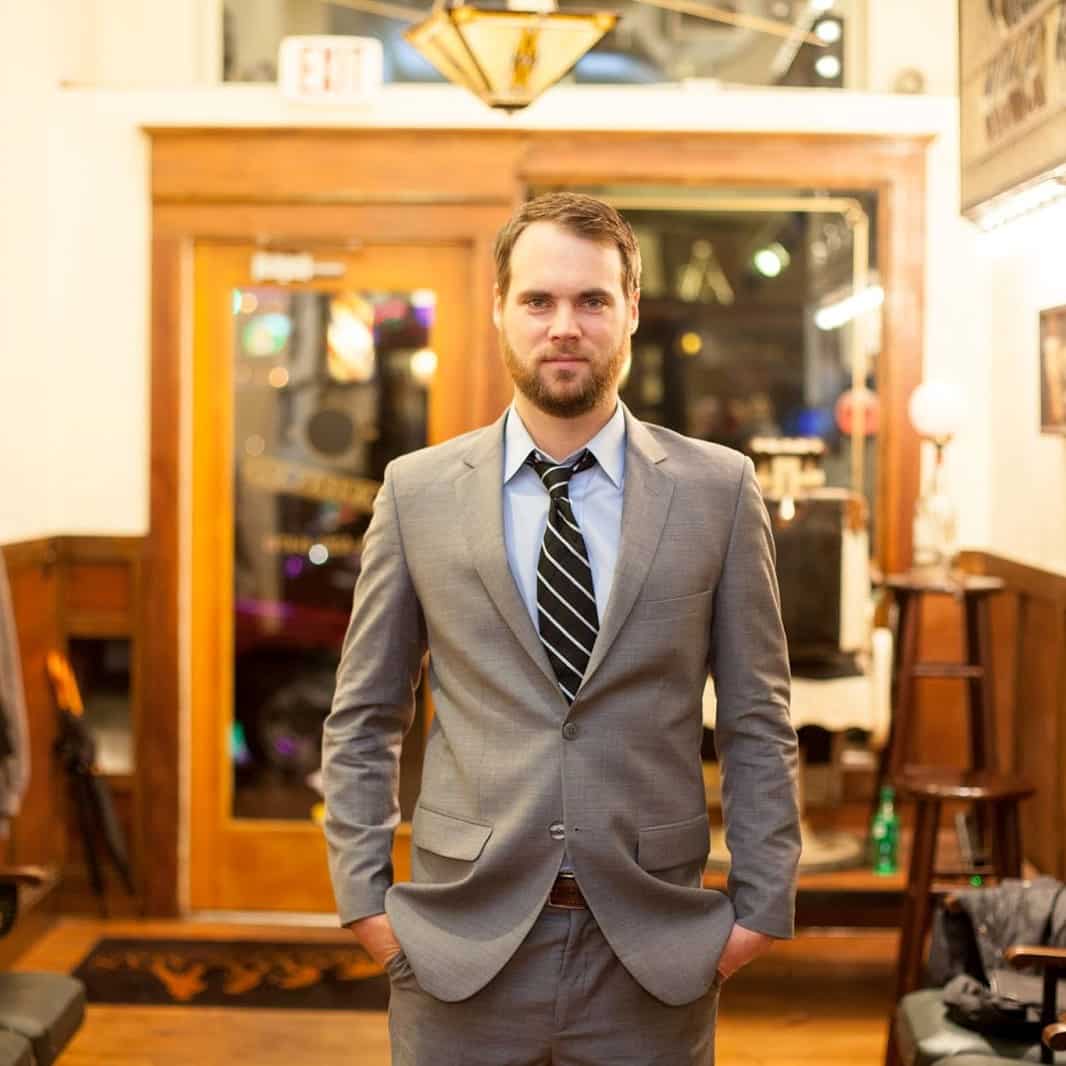 Sean founded Location Rebel, a blog to help people build small businesses that give them more time, freedom, and money. After more than 10 years of blogging, he is making six figures per year and has started a golf and a cocktail blog too.

Hi Sean! Who are you and what are you currently working on?

My name is Sean Ogle and I’m the founder of Location Rebel, which I started in May of 2009. I’m 36 years old and based in Portland, Oregon.

The purpose of Location Rebel is to help people build small businesses that give them more time, freedom, and money to enjoy the things that make them happiest in life.

I had a very typical middle-class upbringing, which prepared me to always follow the path of least resistance. By the 6th grade, I knew I’d be going to Oregon State University and studying business. 6 months before graduating, I had a job lined up as a portfolio analyst for a small investment firm. It was always just taking the easy road.

Two things happened that changed that.

1) I started my desk job and realized it wasn’t anything like I imagined it being. The novelty of wearing a suit only lasts for so long.

2) I started in July of 2007 - which was at the peak of the stock market. By February 2009, the market had crashed. My boss was unhappy, our clients were unhappy, and I was unhappy.

I needed a restart.

I saved up all of my vacation time for the year to go to Carnival with my best friend Ryan in Rio. We spent two weeks hang-gliding over Rio, dancing in the Carnival parade, and even visiting Iguazu Falls, one of the seven natural wonders of the world.

On the last day, we were sitting on Ipanema Beach, thinking “we should be able to do this whenever we want.”

That was when I knew a change needed to come, and within two months I’d launched Location Rebel simply as a vehicle for change for myself, and to hold myself publicly accountable for all the things I wanted to do in life.

I had two goals when I graduated college: Travel and own my own business. I wasn’t getting closer to any of those in my job, and this was the tipping point that encouraged me to pursue both.

The first thing I did on the site was publish my bucket list. 100 things I wanted to do before I died. I started checking them off, and people started paying attention. I think the brutal honesty of where I was at in life, coupled with an attitude of “if Sean can make a big change, maybe I can too” is what initially helped to get some traction.

By October of 2009, I’d left my job, and in January of 2010, I moved to Thailand where I began doing freelance SEO and freelance writing.

What I realized later on is that this freelance work was the bridge from a life that left me unfulfilled and unhappy, to one that allowed me to do whatever I wanted to do.

This also formed the basis for Location Rebel Academy.

I believe the easiest way to get out of a day job, and build a sustainable long term lifestyle business is to follow a 3 step process:

This video talks about that three-step process and is also my favorite thing I’ve ever made:

This sets the stage for Location Rebel Academy, our product.

By July of 2011 I’d realized that I had learned a lot, and this process that I’d gone through worked for me, so maybe it would work for others as well.

I spent 3 months creating a course that taught you essential online skills, but more importantly, taught you how to make money with them through freelancing.

I spent 3 months promoting the launch. I released a PDF book of all the tools I used to work from anywhere, and then released 4 videos covering some of the main tenets of the business. This included things like the reality of job security and rapid skill-building.

We launched at 9 am on July 26th, and within 48 minutes we’d sold out all 20 spots. I couldn’t shut the sales page down fast enough and we sold 4 more.

So in less than an hour, I made $7,000 - and that’s when I began to believe in the potential of what I was building.

But it wasn’t all easy from there on out.

Riding off the success of our beta launch, two months later I planned the “real” launch.

One of the mistakes I made early on, was thinking that I had to be traveling all over the world and proving you could “work from anywhere” to get people to join.

So for the main launch, I moved to Bali for two months.

I had huge expectations riding off our previous success.

I got everything prepared, I stayed up late Bali time to do the launch, and when it went live?

No more than a handful of sales.

People didn’t need or necessarily want to see me in an exotic location. Most people following Location Rebel just wanted to be able to work from home from their sweats. Or have the ability to take their kids to the park in the middle of a Tuesday.

It took me a while to learn that lesson, but once I did, it took some of the pressure off the travel aspect of the site.

Since that launch 10 years ago, we’ve now had over 4,000 people go through the course. We’ve had hundreds of people quit their jobs and build successful online businesses.

Over the years since launching the course, we’ve tried several different marketing strategies.

But honestly, the thing that has worked the best is putting time and effort into creating content that ranks organically.

We focused primarily on a hub and spoke content strategy, where we have one definitive post for our primary keyword, and related “spoke” posts to cover related keywords in more depth.

Then we have anywhere from 6-15 “spoke” posts, that all link back to that post, and to each other that go into depth on specific topics mentioned within the hub post.

Doing this has led to a lot of natural links, but we’ll also do guest posts around the most valuable topics.

We’ve done this for about a dozen different topics on the site, and it’s worked well over the years.

Lately, YouTube has also been helping to grow the business and we’ve found that the nature of video has led to higher quality and more engaged followers.

As far as conversions go, we decided a few years ago to keep it simple. One funnel and one primary offer. Rather than offering all of our courses ala carte, we wanted to focus on just selling the Academy as a whole.

So we tweaked and tested our email series until we had one that converted well, and while we’ve updated it over the years - it’s still fundamentally the same one we’ve been using since it was first created.

Content marketing with organic traffic is not the sexy thing, and it takes longer than other marketing methods. But we’ve found it to be more sustainable and less fleeting once you do get it right.

Today, things are great. I’ve always been someone who needs multiple things going. I get bored easily, so having a handful of different businesses and brands, while maybe not the most effective for growth, has allowed me to stay engaged for over a decade.

So Location Rebel is doing great, and our big change this year is moving over to an all-new platform for our membership community and redesigning the site for the first time in 6 years.

But a lot of my attention is going to Breaking Eighty my golf site, and Slightly Pretentious my cocktail site.

Location Rebel continues to do six figures a year, as does the golf business. The cocktail one is new, but already starting to earn affiliate revenue.

My goal is to build things that don’t just make money, but that enhance the enjoyment I get out of my hobbies - while hopefully helping people in the process.

Right now the only other person working with me is my community manager Liz at Location Rebel (although that term doesn’t do her justice to the amount of stuff she does for the brand).

I’ll occasionally hire writers or developers if I need them, but I like not having to manage anyone but myself.

The challenge lies when you’ve built 3 things that all deserve full-time attention, but that doesn’t always get it.

Revenue continues to grow across all 3 sites, so the goal now is to manage them while continuing to maintain the lifestyle aspect that got me into this in the first place.

Since starting Location Rebel, what have been your main lessons?

The worst-case scenario rarely happens, and when it does, it likely isn’t as bad as you think it’s going to be.

The process of starting a business is not difficult. The work isn’t hard. What’s hard is being persistent enough to keep working amidst the ups and the downs. I know very few people who have spent at least an hour a day working on a lifestyle business for two years that haven’t had a certain amount of success.

Starting a blog is the most valuable thing you can do if you’re not sure what the first step is. Blogs aren’t dead. As social media algorithms continue to shift, owning your website and email list has continued to just get more and more valuable.

Honestly, my biggest mistake is not choosing one thing and sticking with it.

If my sole goal were to grow the business, have as much impact, and make as much money as possible, it would have been much easier to just do one thing.

Managing 3 limits the opportunities for each, if I’m committed to not bringing on a team. As soon as I focus on one thing I’m dropping the ball on something else.

I don’t know that I regret going this route as the opportunities each has afforded, and the lifestyle benefits I alluded to above, have made it worthwhile.

But I spend a lot of time thinking about what it would look like if I were to go all-in on just one thing and if it would be worth it.

The biggest mistake we ever made in the business was a technical one. We moved the entire site over to a service called Rainmaker in 2016. It was a disaster. The member experience suffered, the company didn't deliver on any of their promises, and a month after switching traffic dropped 30%.

We spent thousands to design the new site and move it over, and thousands more to move it back to WordPress two years later.

The lesson here is to make sure if you’re going to trust your whole business to a technical platform that you verify it’s delivering on what they say it will.

Depending on what you’re interested in, there are a lot of places you can find me: