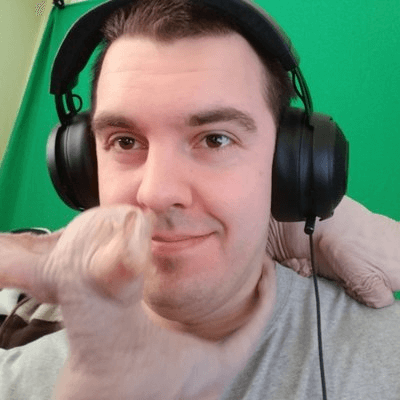 101 Studios was a producer of video games that taught users things while they played. They went with a “business to professor” business model, but despite professors like the idea, they wouldn’t implement it in their classes. The startup could never reach product-market fit and shut down months later.

Hi Matt! What's your background, and what are you currently working on?

Hi, I’m Matt “GundayMonday” Sever. I’m a data science professional in their early 30s out of Detroit, MI. First entered the data science field from a grad school DARPA grant to successfully predict when soldiers were going to get sick with the flu before they started sneezing. Fell into the fintech space working for Quicken Loans on everything from speech analytics to nationwide automated marketing engines. And have dabbled in video game-related startups for the past decade. Most famous is Instaburst (200+ virtual team that made League of Fighters), but we’ll be talking about my first startup 101 Studios today!

101 Studios was an edutainment producer. That’s a cringe-worthy word for “video games that teach you things while you play them”. Our flagship (and only game) was called Antibody. You played as a soldier for hire who would shrink down to microscopic size and fight germs inside of sick patients. We made a pokemon clone to do this where the random monsters you’d fight were actual bacteria, viruses, and fungi. You’d use real treatments to take them down. Each random encounter was a flashcard, each type of attack a different answer you could potentially give on a med school exam. Thought was to gamify what med students usually brute force memorized to make it easier to remember!

The business model was to develop the game(s) and then sell access to play with a monthly subscription fee.

What motivated you to start 101 studios?

During college, I thought I wanted to be a doctor. But oh man, the pre-med weeder classes were horribly boring and structured in a way where it wasn’t easy to study or learn. I noticed that my fellow classmates felt the same pain, and started looking for a better way. Inspiration hit when my roommates were talking about how they could remember every pokemon from 10 years ago, but couldn’t remember what they studied yesterday. That was the big ‘Aha!’ moment.

Growing up I was always a gamer. My family would play hours of Dr. Mario (trash-talking the entire time) every week, and I always had the newest Nintendo game to dump hours into after sports practice. I continued playing games during college and made friends with some kindred spirits. My freshman roommate and co-founder was the best Meta Knight player in NA, so I was constantly surrounded by hardcore gamers and the new hot games.

This kind of environment made it easy to tie game mechanics to a better way to learn.

The University of Michigan (Go Blue!) has an amazing library. Every book you could ever want. I started devouring everything about games and learning and found that every book I tried to check out was on the syllabus for this EDU 222 class called “Games and Learning” led by Barry Fishman. Ended up enrolling in this class alongside my graduate work (studying Hospital and Molecular Epidemiology). The knowledge gained here helped us build the foundation for a working product and learn exactly why I remember everything about the Pokemon game from my middle school years.

During college, I thought I wanted to own and operate my own music venue (being a doctor was my back up plan). To vet the field, I formed, led, and wrote music for a ska band called “Gunday Monday”, named after a joke about arm day at the gym. Ska was perfect music for understanding the music industry. Enough people liked it around Ann Arbor that you could get shows at every venue, but not enough liked it enough to form bands to compete with you for those shows. I ended up opening for every one of my favorite acts and getting to see them for free. I also saw how different types and scales of music venues worked from the inside. This taught me enough to know that I did not want to own my own music venue, although it was a lot of fun.

That ska band taught me all about music production which generated all the sound effects and music assets for our game with 101 studios. Still have a few on Bandcamp here if you want a taste. I also learned a ton about management. Trying to get a team of 8 musicians to show up on time, let alone play music somewhat passably, was another good challenge that grew some serious new leadership muscles. This gave me the foundation I needed to build out the art assets while my co-founder coded up the actual game engine.

We started super lean. Our first “game” was four screens, with two fightable enemies. We worked with a friend of the family (Paul Slusser who worked on AAA games like Orcs Must Die) to make some rad art assets for us, and pieced together a prototype level. My co-founder, Dave, ended up building his own game engine from scratch to run it. I produced all of the music/SFX and worked with Paul to get the art assets ready. After a few months, we had a demo level where you shrunk down to fight foot fungus under a toenail. Our demo took ~15mins to play through.

Did you run into any obstacles in this process? What did you do to overcome them? And how did you approach the pricing strategy?

The demo only worked on PC, had a ton of bugs, and took WAY too much time to produce. We were able to show the concept, but also found that producing a larger game was going to be significantly more work than we anticipated. This was the main issue that killed the project.

Did you enjoy the process of getting started / building it? Did you launch/publicize it in any way? If so, how did that go?

Yeah! This was a ton of fun to figure out and build from scratch. Sad it didn’t turn into anything, but the concept of video game random encounters as more engaging flashcards worked when we tested it, so might return to it in the future when I’m bored on a rainy day using a newer tool like RPGmaker to simplify a lot of the pain points we had.

Our thought was to go B2P (Business to Professor). If we could get classes to use our tool, then we’d have new customers buying our game every semester. Thought was to partner and grow our relationships with professors and help build customized games for their classes. In practice, it was tough to get anyone interested and even tougher to customize class by class.

How did you employ/approach these tactics? Have you found anything particularly helpful or advantageous?

This whole endeavor taught me that you should talk to as many potential users as possible during the building process. It would have saved younger me a lot of time and headache knowing that the monetization funnel was going to fail before spending time building out assets and a custom game engine from scratch. Getting warm intros makes these users/potential sales meetings easier to get on friendlier terms. You get better feedback too. Leverage your immediate social network to help you out and learn as fast as possible!

Which were the causes of 101 studios failure?

Every professor we talked to liked the idea, but wanted something hyper customized for their specific class. This was hard to build and plan for. Many of them like the concept, but not for their class (probably a polite “no”). This was the start of the end.

We built a product that was difficult to scale, and hard to customize for the specific needs of our consumers. People liked the concept of “a video game that is fun to play and will help you ace the big exam” but it was very hard to build that in a scalable way that actually delivered. Huge time sink to build something people were at best lukewarm to using.

How did you realize you were going to fail?

We started talking to users and potential customers. We kept getting feedback along the lines of, “Wow what a great idea! But I would not use this unless it had X, Y, and Z!” Was tough to get the product to a point where it satisfied the different needs and wants of everyone. It definitely would have been smarter to listen to significant amounts of user feedback first before building something complicated.

What did finally provoke the shutdown of 101 studios?

After it became apparent that no one wanted to buy the things we were building (failed sales pitch after sales pitch), we pivoted to my cofounder’s idea to build a League of Legends inspired fighting game called League of Fighters. We could leverage a lot of the work and network we had built for 101 Studios, so felt like a good pivot. That one failed for completely different reasons but was dramatically more successful! Didn’t feel like we ever shut down 101 Studios, it just changed into something better with superior consumer targeting. It was fun and exciting to work on something a large number of people wanted!

Mostly time was lost here. Spent a good 3 months building out the product and another 3 months of networking before networking with potential users. $800 worth of art assets, but the rest we built ourselves. Not too bad, but we could have learned to build a different product if we flipped the order and talked with users first.

Build the easiest MVP possible and get user feedback early. Keep talking to users as you grow the product. This would have saved us MONTHS of time and allowed for an earlier pivot to something that would actually work!