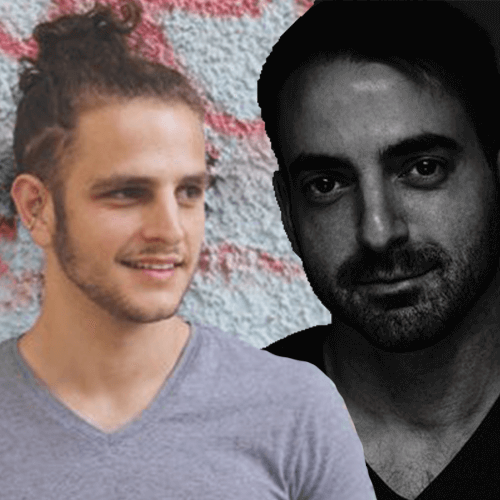 Botnim was a web application that provided near dishes and their nutritional values. Read now the story of the 2 co-founders with a failed startup.

Hi Shaked & Gilad! Who are you?

Hi, I'm Gilad, and I'm 33. I used to work as an analyst in a consulting firm in Tel Aviv, but now I'm on a new path to make stuff on my own. I'm also an investor and a market speculator.

As an economics student in the Hebrew U, I rented an apartment in Jerusalem and Shaked's brother was my flatmate. Later I spent one summer in Berlin and Shaked was also there visiting. We became friends and talked a lot about starting a business together, but we waited until the time was right.

What was Botnim about? What motivated you to start it?

Botnim was all about finding dishes around you by their nutritional values and location.

I started getting into calisthenics, MMA and generally into fit in mid-2016. While and before doing that I used to eat outside - which is probably not the best thing do especially if you do that 3 times a day. So, after few months into the fitness world, my nutritionist friend built a menu for me and I started to cook at home.

For most people, it's a hassle to cook at home, but even when they do that, sometimes they just can't get back home nor carry food & have to eat outside.

This all thing happened exactly when I came back to Tel Aviv after a year in Berlin. Tel Aviv is very much into fitness & good food, so it looked like this would be a great service to have for people who care about their diets, including myself of course!

Once I got to this point, I called Gilad and told him about the idea. He loved it and we started working on it.

How did you build it? Which was your business model?

Botnim started as a Messenger chatbot. The main reason behind it was that chatbots are very easy to develop. I have already been working enough time with chatbots in order to know that it would take less time to be ready for production in comparison to a website that looks good on all devices. I think that the main difference is that developing chatbots means you don't deal with UI at all, and coming from a more backend background that was a great solution, so I developed it using PHP on a nginx server.

Unfortunately, there are also tradeoffs. Using chat in real time - e.g walking in the street and looking for a restaurant, seemed like an issue. Messenger's bots sometimes have slowness issues which were unacceptable. The worst thing happened when we showed the chatbot to business owners and we had to apologize for its slowness.

At that point, we took some time to rethink about Botnim’s concept. After few days, maybe a week, Gilad came up with the idea of creating a map that will show all the dishes we have and allow users to filter them by different nutritional values and food preferences such as vegan/vegetarian/all.

Few days after I sent Gilad a link and the map was there integrated with all of our data. This was a huge breakthrough because this time business owners loved it. I built Botnim.co using PHP, jQuery, Bootstrap (even though I'm sure I could have skipped it) & MapBox - as it works much better than Google Maps.

I remember the day when I first went door to door after changing from the slow ugly bot to the map. Every single restaurant was interested and thought it was cool.

Once the website was available, we spoke to our friend Naama which is a graphic designer, asked for some design improvements and she volunteered to help. At the end, we got a very nice result!

As to the business model, in hindsight, it was quite a complicated model. We were counting on getting paid from 3 different sources:

As a B2B2C business, how did you validated both sides?

The main issue starts when you do B2B2C & you only validate 1 side but not the other. We started to talk to people, either by face to face (at the gym for example) or online using FB groups & some old school forums. Most of the things we noticed were quite obvious in retrospective.

So for instance, we also started posting what’s happening with the business in a blog which was supposed to be targeted for our customers. We called it “Blasting Floodlights” - a paraphrase from a synopsis of a book we both liked, aiming at “lighting every corner” of the process of the business with radical transparency. It is hard to write, but for me emotionally what was even harder - is writing only to one side, knowing that the restaurants would want to read or hear about a totally different thing. I remember it was frustrating. It’s like there couldn’t be a focused effort to bring both sides together. Every hassle was on its own for one side only. Overall, healthy restaurants showed more interest, and eventually I planned a bicycle route with 6-8 healthy restaurants along its path, and just spent few hours going from one to another, talking to a manager or whoever was there, asking for the owner’s phone number, coming again later to talk to him, calling and nagging. You have to get used to looking to a person in the eyes and talk to him with confidence, trying to persuade him to join, and some did join or at least thought about it, but not a lot.

Which were the causes of Botnim's failure?

So for me, it was the dependencies. Driving 45 minutes to the lab every time was exhausting and time-consuming. And It took much time and energy talking to restaurants, persuade them to join, persuade them to pay for the food-check, going like that door-to-door, and realizing that we can’t make a progress at one front without a progress in the other. Restaurants wanted to see users, but they wouldn’t come without restaurants, and restaurants asked how many users do we have before paying for the food-check. I figured that this is not how I want the business to come about. It’s like we were a low-tech business, with just an app to support it. Of course, if we had money then a guy would have delivered the dishes to the lab for us, or we would have paid for ALL the food checks just as a proof of concept instead of asking restaurants to pay, etc. But we just couldn’t go on like this.

I think that what disturbed me the most and always felt like a problem, was the fact that I want to keep on traveling and live abroad. As Gilad mentioned that would have been quite complicated thinking about the way things worked.

We had no “investments”. We used only our own money.

For every dish a restaurant paid to be checked in the lab we also paid for one. Dish check cost ~$80. We later tried to reduce it to only paying for 1 dish for every 2 dishes paid by the restaurant. Then there was the gas for the car.

It’s easy to say now, but market validation is definitely one of the 1st things I’d do. Specifically, in Botnim’s case, I would have checked with people what they want before assuming it, then execute accordingly.

As a maker & software engineer, the most important part is not to be attached to your code. Going from a chatbot to a web application meant throwing all of the chatbot’s code and not looking back. Thinking about this decision retrospective, it was one of our best decisions.

Having said that, I think that it is a good practice to have something first and then improve/change it.

Which entrepreneur resource would you recommend?

I like hearing interesting stories and Sarah Ball is definitely someone who got them. Also Ernst Mulders - This guy was too young to open a company so he asked permission from a judge. If that's not a reason to follow him, what is?

I agree. Also, I’ve never read entrepreneurial books. I feel it’s more of a try, try again thing. Do successful people did what they did because of other guy’s entrepreneur books? Maybe, but I doubt it.

I follow Andrey Azimov. He's not famous (but he will be). He's a great maker, and he's doing stuff right. Good energy & good "try, try again" modus operandi. Also Pawel from VanSecrets. He works hard and has an ultra-fantastic product which makes me jealous.

Definitely active on Twitter where I also tweeted about Botnim. Other than that I have a blog and I'm active in a Telegram group called WIP.

You can find me on Twitter @giladmp and on WIP.

We have decided to travel to Mexico and work from there for a couple of months.

Being able to start a business with no ties to a specific location is important to us, so traveling will definitely force us to stay flexible in that regard. We have some ideas for new projects. If you’re around, say hello :)