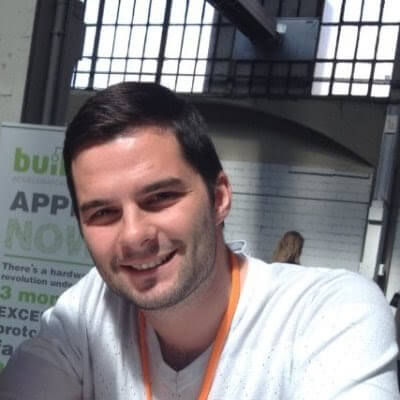 In 2012, Ivo started a 3-year journey building a business that sold iPad racing wheels, which would suck up $50,000 in personal and investor funds. The hardware accelerator he went through wasn't able to help turn his business into a success, neither was the Kickstarter campaign successful. Learning from the experience, today Ivo runs $1M+ crowdfunding campaigns. Read below to learn about his journey.

Hi Ivaylo! What's your background, and what are you currently working on?

KOLOS was the ‘world’s first’ iPad racing wheel that never was. You clamp it to any table, insert your 9.7” iPad and start playing your favorite tilt games instead of holding the tablet in the air.

I was the ‘genius’ (and CEO) behind the idea, and, as with any startup, I was doing a little bit of everything - marketing, business development, investor relations, customer support, prototyping, etc.

What motivated you to start Kolos?

Great question and one that many founders probably do not ask themselves but jump straight into building a business.

Just the idea of having a startup. The idea that I was ‘brilliant’, and smart, and I was going to build something new and cool, and show it for the world to see.

As a student, and working as a customer support rep at the time, I always knew I was going to be an entrepreneur, so there was my chance to ‘prove it’.

Yet still, I had:

Heck, I didn’t even own an iPad. I bought one after I came up with the idea.

Instead of using DIY materials like wood or off-the-shelf parts of gaming accessories to test if the idea was even worth it, I went straight to the bank, took a huge loan and then paid industrial designers to start working on the 3D models.

After those were done, I paid literally thousands of dollars for super expensive prototyping online (Shapeways.com) since the models were big and bulky to create.

I also paid someone to write my own business plan, I used the loan money to fix my old car, and essentially found numerous ways to not spend the money wisely.

At the time I was doing my day job and studying, so at some point after 2 years in development, I decided to launch it on Indiegogo.com.

Naturally, at around $100 a piece, no one bought it. I also had little idea of how to run a crowdfunding campaign.

I still didn’t give up.

Later, after countless rejections from accelerators and investors, me and my co-founder got accepted into the Buildit hardware accelerator where we spent 3 months and another $20,000 on the business.

Shortly after, we finally had to find a way to launch it as we were running out of money.

In early 2015, a Kickstarter campaign followed where we raised $4,000 and had to shut down the campaign shortly after.

What marketing strategies did you use?

We didn’t ‘go to market’ so we used 2 main methods of acquiring leads prior to launching on crowdfunding.

We sucked hard at ads as it’s complicated and successful Facebook campaigns require enough budget for testing (which we didn’t have).

We were relatively good at PR (and something I used once KOLOS failed to get my first clients). P.S. my Paint skills were that good though:

And since we were out of money, we were using some ‘creative’ growth hacking techniques like looking through Facebook groups of iPad gamers and sending them friend requests, then ‘pitching’ them KOLOS.

Eventually we had an email list of less than 500 people which was way below what was needed for an even remotely successful launch on Kickstarter.

The conversion rates on the page were also pretty bad which was the main factor that contributed to the failure.

Post-factum we found out people just don’t care about the problems we made-u… ehm, were ‘solving’ with the wheel.

Which were the causes of Kolos failure?

Knowing what people want and are ready to pay for it needs to happen before you build your product, not after.

So I would spend most of the entrepreneur’s initial journey on fanatically learning about customer needs and providing them a solution they actually care about, not one that the founder fell in love with.

Founders also need to be brutally honest with themselves about what they are building and whether it actually makes a difference in people’s lives.

For example with KOLOS we weren’t hearing enough “I want and need this” but instead “I would get it for my son/nephew” (i.e. not the real customers).

Right after the Kickstarter campaign ended in early 2015, we shut down the operations and parted ways.

It was a natural decision that we didn’t even ‘take’ - we had decided if the Kickstarter doesn’t, there’s no need in pursuing anything beyond.

Even before the crowdfunding campaign started, I felt ‘comfort’ inside that whatever happens, will be for the best and that it’s time to either fly or ‘die’.

When I say ‘avoiding’, I mean that I intuitively knew it was the right thing to do, but I still didn’t get the courage to do it in fears I would get rejected.

I also felt I knew better, thinking that I understood the problems people were facing, so there was just ‘no need’ for additional customer discovery talks.

Why waste that precious time?

I also felt uncomfortable talking about it with strangers, so these are all fears founders must overcome in order to get good at getting to know their customers.

The other huge mistake I made was to take out a loan to start the business.

The failure rate among startups is so high that it’s simply not worth risking your own money. Instead aim for accelerators, incubators, and angel/VC money.

Better yet, before even talking to them, I would focus on validating the demand first before ever jumping into those conversations which can usually take months.

$20,000 was the investment done by the Buildit accelerator.

These don’t include the funds I had to take from friends and family to make ends meet.

The Kickstarter campaign raised $4,000 total from 48 backers (some of which were my own friends who didn’t even have an iPad) which were then returned to the supporters since Kickstarter is an ‘all-or-nothing’ model.

Honestly, the entrepreneurial materials these days are so abundant that just reading the top 100 business/biography books on Amazon would skyrocket one’s chances of success 100x - the leverage is exponential, drawing from other people’s experience/failures/successes.

Still, nothing beats battles on the ground, so practice what you read and aim to be the best in your field, regardless of what you are building - it’s the only way to stand out and get noticed.

Since the KOLOS failure in early 2015, I’ve been helping numerous tech startups raise over $7M on Kickstarter and Indiegogo through my own consulting company: DayOneFunding.

I’ve also been the campaign manager for the 15th largest tech Kickstarter in history - Superscreen ($2.5M) and currently sit as the #1 'Most Viewed Writer' in Kickstarter, Indiegogo, Crowdfunding on Quora.

Since early 2019, I have been partnering with the superb 80+ team at TheCrowdfundingFormula to make million-dollar hardware campaigns.

I would encourage anyone to get in touch if you/they know someone with an amazing gadget that could be the next big thing.