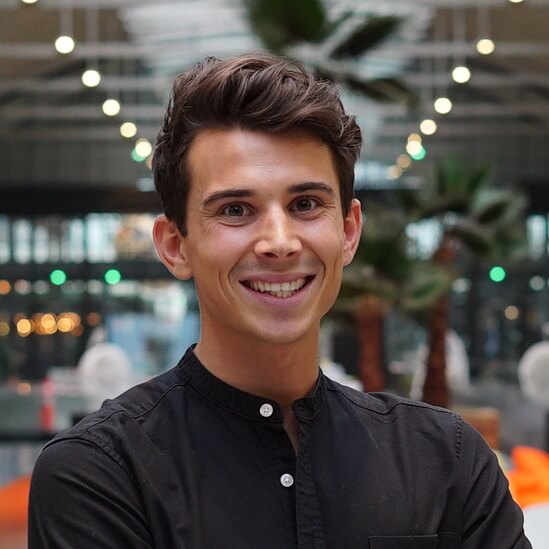 Guillaume felt frustrated with the cold email tools in the market, so he decided to build one himself. The key differentiator would be the combination of personalization (on text and images) and email. Through cold outreach, promotions on communities and a huge AppSumo launch, the 3 founders have grown the tool to $1M in ARR.

Hi Guillaume! What's your background, and what are you currently working on?

My name is Guillaume, I’m 28 years old living in Paris and I’m the CEO and Co-Founder of lemlist, a cold email platform that allows sales teams to book more meetings thanks to the power of personalization. As a CEO, I’m taking care of management, strategy and sales, while my two technical co-founders handle the tech side.

Before starting lemlist, I actually had a lead generation agency called LeadGuru, where I was essentially helping B2B startups scale and acquire more customers using cold emailing. Essentially, we were doing all the sales prospecting for our customers and we were asking them to pay per lead we brought them.

After using various tools on the market, I felt pretty frustrated with the lack of personalization they were offering. That’s when I started building lemlist. We launched two and a half years ago, in 2018, after I sold my LeadGuru shares and stopped working on it.

We currently have 8000+ customers worldwide, including well-known companies like Zendesk. It’s been quite the journey and we’ve put a lot of work into it.

I'm a Chemical Engineer (which has pretty much nothing to do with what I'm doing right now) and I’ve worked for companies like P&G and Hermés.

Then I did a Master’s in marketing and this is where I started launching companies. I initially started a t-shirt business that didn't work really well, so I quickly moved on to LeadGuru with some friends.

We made a bit of money, but I wasn’t really happy with such an unscalable business. At the same time, I was really intrigued by SaaS business models. I found it super interesting to be paying for different apps like Audible, which increased my curiosity around the software and tech space.

With LeadGuru, we were within one of the biggest French incubators called STATION F. The two co-founders I partnered with on that project decided to move on from a company they were working on at the moment and we’ve ended partnering up to build something new.

Since then, the idea hasn’t changed much. The differentiation factor was to bring personalization and cold emails together. But, as personalization of text already existed, we took it to the next level and introduced customization of images and landing pages.

How did you build lemlist?

Building the product was pretty easy for my co-founders. They have been developing products for a long time. We had our first version ready within two weeks. That was surprising because, in my previous experiences with devs, everything used to take quite a bit of time.

They used JavaScript frameworks called Meteor and Node, as well as MongoDB for the database.

Pricing was simple in our case. After we’ve analyzed our competitors, the decision was to set a low price (around $19/month) for the basic version and we’ve increased it since then.

However, it wasn’t all roses and sunshine in the early days, though. Our “activation rate” metric (when someone would sign up and launch a campaign) was low, as the UX of the product was far too complex.

Along with some not so happy first paying users, this led us to re-think the whole UX. After fixing it, our activation metric increased by 100%. We lost a few users initially but acquired two or three times later on.

Once the tool was built, my goal was to acquire users without spending any money. So I went with four channels:

We’ve also tried out referral marketing in the past but ended up having problems. Initially, it was doing well, but then, during a holiday in Sri Lanka, I used Google to see how things were going just to find an affiliate member doing Adwords for that keyword.

Digging into it, I found some partners were bidding on our name and stole our organic traffic. As our revenue share was pretty high, there were people making money doing simple AdWords campaigns. That’s when we decided to turn it off.

As for ads, we haven’t done much. Customer acquisition costs on Facebook resulted to be quite cheap, but it wasn’t very accurate. We decided we wanted to keep it small, focus on the product, and maybe in the future, go on with Facebook & Google Ads.

Retention, which was quite a problem at first, was great later on. The intention was to educate users as much as possible and avoid having people join without actually using the product.

We’re currently at $1,000,000 in ARR. Between June 2019 and December 2019, we’ve generated huge growth, much faster than before. I think I’d attribute that to the compound effect, as we have been growing x%/month quite steadily.

Can you tell us a little bit more about lemtalk and lempod?

lemtalk ($60,000 ARR) is basically a live chat that allows you to connect all your messaging channels directly into Slack. For example, if someone sends an email to support, you can see it and reply all within Slack.

This product was actually built before lemlist by my two co-founders. However, we decided to move it to what we now call the “lempire”, which is our series of products.

Regarding lempod ($220,000 ARR), it allows you to get more views and more reach on LinkedIn. It was part of a problem we were facing, as every time I was posting on LinkedIn, I was copying my post URL and then asking the people I work with to engage.

So I once thought: “Damn, this is so stupid to do every time I publish a post. I’m wasting like so much time”.

In 3-5 days we had the first version and we found many people had the same issue. We shared it in some groups and after two months, we had 1,000 users. That’s when we started charging for it and growing the price 25%/month.

Since then, we have hired someone to work specifically on the product. We have processes documented on Notion in terms of growth, SEO, partnerships, communities, making everything much easier. Anyway, I had to hire someone, as well, to train this new employee.

Right now, we're a team of ten. There are three co-founders, two people handling lemlist support, one person focused on growth, two more developers and one growth marketer for both lempod and lemtalk.

In the next 3-5 years, we want to grow lemlist to $10M in ARR. At the same time, we would like to keep things simple and have a team that’s sharp and smart. A team of 15 by the end of the year would be enough.

We’re also moving lemlist to be more multi-channel. Right now, we're 100% focused on cold emails but we will be adding calls, LinkedIn, Twitter, and pretty much every channel where you can do sales prospecting. The objective is to make salespeople’s life easier and help them book more meetings and close more deals.

One important personal goal, that's not sure if it will happen or not, is to run the Iron Man in August. It's gonna be super challenging being 4 km swimming, then 180 km cycling and you end up with a marathon, so I need to start training at the beginning of March.

What were the biggest challenges you faced and the obstacles you overcame?

The biggest challenge is growing, and doing it so at the same rate as in previous months.

The more you scale, the more challenges you get on the tech, marketing, and support side, so you really need to build processes. Things can go really fast and double in just a few months, and if you do so, you need to be ready to handle the load.

I think I’ve also committed some mistakes when it comes to hiring. We hired a developer who pretended to be really good, for example, to whom we paid a lot of money. However, as the days went on, we started realizing there were days he wasn’t working on lemlist but doing other things.

When we asked him, he felt it was normal not to have told us about it before. He generated tons of bugs because the code was of poor quality and it was really a waste of time. We even tried to convince ourselves that we could train him and help him get better, but that didn’t happen.

Right now, we're much more strict. If someone doesn’t fit the requirements that we have, we just fire him and that's all. I always recommend hiring and firing fast.

Another mistake we committed was going after enterprises early on. After doing some prospecting in Silicon Valley, I met with Uber. We had five or six meetings and they were always super interested. I started spending a lot of time and then they started asking us about regulations, safety, security, etc. I was like holy shit.

I started talking about it with my co-founders and everyone was super excited. But after looking at this, we realized it would require three to four months of development, just for a deal that we weren’t sure we’d be able to close. So we thought: “Let's focus on our main market, which is essentially SMEs and startups, and move on”.

As for books, I’d recommend “Predictable Revenue” by Aaron Ross, which is a little bit old, but a great book when it comes to sales. Anything from Robert Cialdini, who writes about psychology and sales. I really like Dan Ariely’s “Predictably Irrational” which explains how we think and why our decisions are based on irrational things.

When it comes to blog posts, I love Growth Hackers, Demand Curve, and Indie Hackers. In terms of podcasts, I enjoy SaaS Club.

I invite everyone to connect with me on LinkedIn and to join The Sales Automation Family on Facebook. For cold email tactics and my best-performing templates, you can check out lemlist’s blog. I also blog about entrepreneurship stuff on my Medium. Everything else you need to know about me is here. Finally, if you wanna try lemlist, use our free trial.