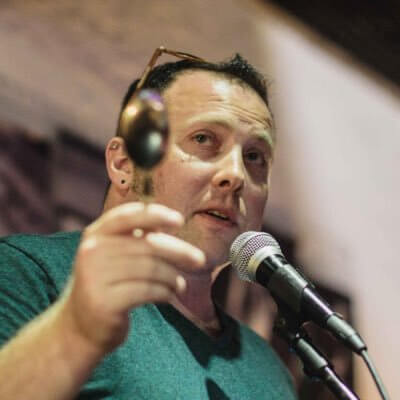 Alex and Amy are the founders of Stacking the Bricks, where they publish podcasts, articles, resources and courses aimed to help creative people start their own self-funded businesses. Learn about the origins of their business, the pivots made throughout these 10 years, and their marketing approach.

Hi Alex! Who are you and what are you currently working on?

My name is Alex Hillman. I'm 37 and I’m based in Philadelphia, Pennsylvania.

I split my daytime into two main businesses and some other projects that are adjacents to them.

The first business is Indy Hall, a coworking community and space that I started in 2006. It was initially focused on Philadelphia, but as things evolved, particularly during 2020, we have grown far beyond just Philadelphia. Our community is mostly formed by independents, freelancers, solo entrepreneurs, and a growing population of remote workers.

Indy Hall’s main focus is on helping people meet other people they have things in common with. Building that foundation of trust and relationships is our main priority because we've seen these two factors create really powerful businesses.

The second business is the one I’ll be talking about in this interview. It’s called Stacking The Bricks and I run it with my dear friend, Amy Hoy.

Both mine and Amy’s backgrounds are in software development. We both had full-time jobs, which we left to start consulting, which we then left to start our own businesses. In my case, Indy Hall. In Amy’s case, a series of technical eBooks and training and then her first SaaS called Freckle (now Noko).

I met Amy in 2007, at a music and film conference called SXSW in Texas. We soon became friends and stayed in touch through the internet as Amy moved to Vienna with her now-husband Thomas.

On Christmas 2009, I traveled to Vienna to visit Amy and Thomas. Sitting in the kitchen, Amy and I had a conversation about why our take on business was different from the startup scene of those years.

It was 2009, post-recession in America, and there was a lot of enthusiasm and hype for startups and venture capital. But we couldn’t understand why our friends, who had the ability to create stuff, were working for startups (or raising tons of venture capital) instead of selling stuff themselves.

That’s when we realized that many of them actually didn’t know how to sell stuff. So we thought that if we started writing about our lessons and experiences building and selling stuff, some of our friends would realize there was an alternative to getting into the startup world.

Before Amy and I teamed up, Amy had recently launched her SaaS Freckle and she had been able to get a great number of customers. People were constantly asking her how had she done it so she started selling a three-hour conference call in which she explained the behind-scenes of the business. People found this really valuable and asked her for more information.

That’s when she came to me and told me we needed to teach people who were able to build stuff, help them learn how to start a profitable product business without chasing venture capital .

We first started teaching together on this flagship course originally called “Year of Hustle: Zero to Launch” and later renamed to 30x500.

We’ve since launched a constellation of other smaller products all related to the same problem and audience including Amy’s book Just Fucking Ship and my book, The Tiny MBA. All these products and the 30x500 course are part of our business named “Stacking the Bricks”.

We met in Amy's kitchen once again and we started brainstorming the topics the 30x500 course would include. We then turned that outline into the first version of the course, which was all written. We pre-sold that one for $300-$500, mainly to people who had participated in Amy’s conference call or who were on Amy’s newsletter.

The advantage we had at the moment of starting 30x500 was that we already had an audience, even though it was very small! Amy had been writing about software design and development for years and building trust within the community of designers and developers.

It took us more time than expected to create the course, but when people got access to it, most of them loved it. People told us it was because we explained a different way of thinking about businesses.

The first few versions of the course stayed written, which had the advantage that it was easy to edit. We actually did four complete re-writes of the course, doing incremental improvements on each case.

These versions of the course were really lengthy - it took students around 6 months to complete it.

Despite people really enjoying the lessons, we soon found that few were putting into practice what we taught. We realized the information wasn't enough, and that people needed to treat business skills like a real practice instead of just ideas and information.

At that time, Amy had recently participated in a workshop taught by Kathy Sierra, where she explained her unique approach towards teaching and learning programming. Amy took tons of notes about the learning design patterns ideas from Kathy’s workshop, and  we implemented on 30x500.

The main thing we did when re-structuring the course was to focus on specific practice-able skills . We also made the course much shorter, focusing on only the most essential skills for a successful launch day: how to find and reach your audience, how to understand their problems in great detail, how to come up with product ideas based on that research, and how to write great sales copy.

Instead of a long 6 month course where people would drop off, the new “Bootcamp” version was just 2 full days of intensive live online instruction, followed by an optional 4 week exercise program.

The Bootcamp took place in a chat room, through which we sent the people short video lessons and demonstrations  they had to watch. After watching each video,  we assigned a specific exercise to practice what they had just learned. Once they finished an exercise, we reviewed their work together providing live feedback and guidance on how they did, what they missed, and how they could improve. This format allowed us to put the emphasis on the practice.

The Bootcamp course took place in groups of 30. We taught it 4-5 times a year.

We were making less money initially, but our students were much more successful!

However, after 2.5 years we decided to do a change, partly because this format of the course was absolutely draining for us but mainly because the live format was inaccessible for a lot of our audience who wanted to take the class. People with families and other commitments couldn’t dedicate a full weekend to participate, and people who lived in other time zones didn’t want to stay up overnight for 2 days.

That’s when we stopped selling and teaching the workshop and spent almost an entire year converting the two-day live bootcamp into a much more complete and  entirely standalone self-guided course, now with more than 40 hours of instruction, exercises, guided practice, and tools for implementation

That version of 30x500 launched in 2015 and has had thousands of students   enroll since. It’s a hybrid of pre-recorded video lessons similar to our original Bootcamp, interactive exercises to help with practice and self-assessment, and an online community to support and motivate students to keep going.

Most of our marketing consists of creating educational content, whatever the format is (podcasts, blog posts, tools).

We’re also active within the community of people that we serve, compared to other people that just participate there when they have something to promote. I think that’s something many people miss. Only if you’re a helpful citizen, people are going to look you up, join your email newsletter and end up buying one or multiple of your products. My Indie Hackers profile is the best example of this.

We’ve also experimented with paid ads last year, but we had mediocre results.

The 30x500 course is mainly promoted when we open enrollment  once every quarter of the year, exclusively through our newsletter and waiting list.

I want to continue doing this in the future. The business is a vehicle for continuing to help people. I’m still having fun and I’m always learning new things.

As for goals, we want to increase access from minorities to the course. There are many people who don’t have the advantages Amy and I have. Therefore, we want to help them by lowering the barriers (maybe through financial incentives, programming activities, etc).

Something we have historically been challenged with is setting expectations when we're going to miss deadlines. It’s really stressful to promise something and then have it hanging over your head. So I really try to avoid that in our business by not promising something that's not already done or almost done.

Another challenge we’ve faced is that this is neither my nor Amy’s only business, which means that, sometimes, other things take priority.

Finally, Amy’s health issues have also been really challenging. She has a serious chronic health issue that has become worse over the years. There are periods of time in which she can’t work.

This is even more complicated due to the fact that Amy is mostly the face of Stacking the Bricks. Most people don’t know about me until they join 30x500. People, for example, would write for Amy, I’d reply and they would be like “Oh, who’s Alex?”.

Having said that, I think that many people spend a lot of time on sites like Indie Hackers, and they could be using that time to study their audience and figuring out what they want.

It's good to have that place to go to and be reminded that you're not doing it by yourself because it can be isolating. But I always tell people that where you put your attention will matter. And if you're putting more attention anywhere than on your customers, then you're probably setting yourself up for some kind of struggle.

Some tools (not necessary that we like, but that they do the job) are:

You can check Stacking the Bricks and 30x500 websites.