Growing a Waitlist to 50k Users after Pivoting during COVID 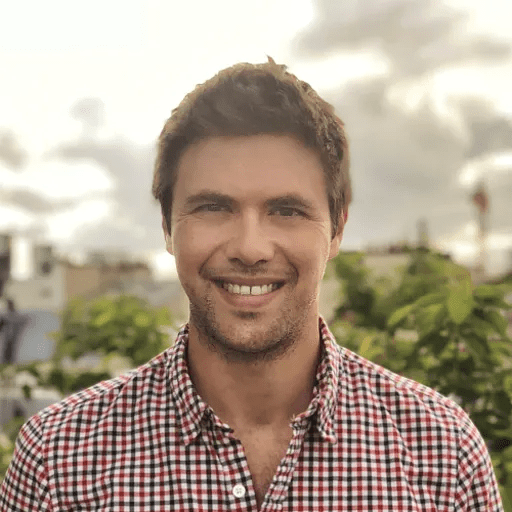 Growing a Waitlist to 50k Users after Pivoting during COVID

Julien is the co-founder of Station, a unified search for teams. It’s a browser extension that organizes all the important resources that a team shares. They pivoted from building a browser and now are in beta with 3,000+ users, 100+ teams testing the product, and 50,000+ users who have requested access.

Hi Julien! Who are you and what are you currently working on?

I’m Julien, co-founder, and CEO of Station, based between Lisbon and Paris. We are building a unified search for teams.

It’s a browser extension that automatically organizes all of the important resources and knowledge that a team shares across their SaaS applications. We make it incredibly fast to find information and easy to stay up to date with what your team is working on.

Before Station I was on both sides of the table: I started an e-commerce platform in Thailand (with my co-founder whom I married 2 years later, my best exit yet!) and worked for a VC firm focused on investing in emerging markets. Ultimately, I found building a company more exciting.

The original version of Station was quite different from the one you can see today. Back 3 years ago my co-founders and I set out to build a browser for work. It was an alternative to traditional browsers like Google Chrome but specifically designed for working with SaaS applications. We grew from 100 beta testers to 40.000+ users in less than 2 years, were elected “Product of the Year” at Product Hunt, went through YCombinator, and raised a $3.25M seed round with Accel in the US. While it all sounds like smooth sailing, we ended up facing a lot of technical challenges (building a browser is hard!) and struggled to find Product-Market Fit with that version of the product (aka retention wasn’t so good). It led us to seriously question our approach and the product we were building.

We looked at hundreds of user interviews, over 2.5 years’ worth of analytics on our product, and every failed feature we had built. We concluded that there were only 2 viable paths for the company:

The B2C path was potentially the easiest one as it didn’t require as many changes to the existing version of the product but we were facing a lot of technical challenges with the stack it was built on.

The B2B path felt more exciting to us. We always wanted to build a product that brings value to entire teams and that makes not only individuals but entire companies more productive. It also felt like this was a real problem we could solve using insights from what we had built before. You know that feeling when you think “Why doesn’t it exist already?”. That was it for us.

While you often hear about “Product-Market Fit”, another equally important concept in my opinion is “Founder-Market Fit” or to which extent you believe to be the right person to solve this problem.

We relied on 3 core principles:

Early 2020 (right before Covid hit), our team met in Sevilla, Spain for a retreat where we worked hard to ship a first MVP. The new adventure started!

By the summer, we had our first 100 beta testers and 10.000+ users on the waiting list. We limited access to the product so we could reduce the signal-to-noise ratio in the very early days. There is only so much you can iterate in the beginning. It’s key to start with a small number of users.

We have implemented surveys, sent to users at key moments of their lifecycle, that prove vital to prioritize our short/medium term roadmap. We use Superhuman’s HXC methodology to qualify our persona’s product preferences, Profitwell’s methodology for monetization insights and we gather feedback in case of churn.

By mid-September, we felt ready and decided to officially announce the launch of our private beta. We received so many reactions it was hard to keep track! Some were disappointed, but overall most understood our decision.

Currently, we are working on our team features. We are still in closed beta, focusing on a few selected teams, but we are still following the same principles.

We’re a product-led company, so we’ve opted for a “land-and-expand” marketing strategy where we acquire one user and then expand from there throughout a team.

With a bottom-up growth approach, you first need to sell the individual value and benefits of the product. A lot of our marketing efforts at the moment are focused on pitching this individual value proposition. We rely on B2C channels to acquire those leads, such as app directories, blog posts, and our social media.

As of now, we have not spent any money on advertising. Outside the B2C channels mentioned, we are essentially growing through word-of-mouth.

For now, the product is still free and mostly used by individuals. We are rolling out the team features over the next 6 months and will start monetizing shortly after that. The goal is to onboard our first 100 teams this year. The most exciting feature we are building right now is the engine that will automatically organize knowledge and information in a team. We are essentially building an automated graph of all the important resources shared in a team and using that graph to make finding and searching for information incredibly fast. It’s quite a challenging task as knowledge can take many various forms in a company (a note, a task, a spreadsheet, a presentation, etc.) and we have to operate within the constraints of the browser but it feels like we are building something very powerful.

Since starting Station, what have been your main lessons?

Lesson 1: Be good at differentiating perseverance from insanity.

This is best captured in this quote by Andreessen Horowitz:

Regularly ask yourself whether you are falling in one or the other category. This “never give up” mantra you hear everywhere from all these “self-help” gurus is truly harmful. Sometimes it’s best to just let go and seek a different path. That’s what our pivot meant for us. And it’s especially hard because that “sunk cost fallacy” is deeply rooted in our primitive human brain.

Lesson 2: Be a pragmatic optimist.

That sort of links to the first lesson and it’s a more personal take on it. There is one quote from a US naval officer who survived 8 years as a prisoner during the Vietnam war, that stuck with me:

“You must never confuse faith that you will prevail in the end — which you can never afford to lose — with the discipline to confront the most brutal facts of your current reality, whatever they might be.”

It simply means being a “pragmatic optimist”. It does sound quite paradoxical but that’s the only way you can build a business and stay sane in the process in my opinion. An optimist who can’t face reality will fail to learn lesson 1. A pragmatic without any optimism whatsoever will just give up whenever it gets too hard. Easier said than done but a healthy dose of both is what I’ve learned you should aim for.

One of our biggest obstacles in the early days was technical. We built Station on a technical stack (Electron) that proved great to build an MVP but challenging to scale and iterate on. Choosing the wrong platform is one of the 18 mistakes that kill startups listed by Paul Graham. We’ve learned it the hard way. It’s hard to know how good a platform is unless you know what you want to do with it (and when you start a company, it’s all in the open), but it’s worth taking the time to make sure you are choosing the right one. You wouldn’t build your 3-storey house on flimsy wooden foundations. The same thing applies here.

Also, building an extension (vs. a browser before) has both advantages and disadvantages. The advantage is that an extension is easier to install for the user, faster to onboard onto hence it’s easier to get the buy-in from an entire team for instance. It doesn’t require a user to profoundly change their habit the way adopting a new browser does. On the other hand, that’s the catch, it’s also very easy to forget that an extension exists. To give you an example, you can use Station in the browser in two ways: hit CMD+E (on Mac) or simply open a new tab. For a while, we didn’t want to go into the new tab because we were afraid it would disrupt the user’s workflow. Nowadays 75% of activity in Station happens in the new tab. Without it, we’d have ¼ of the activity we have today. It’s crazy. With an extension, the stakes to get a user’s attention are higher so you must design your product with this brutal reality in mind. It’s a tricky balance to find between reminding the user your product is here while not disrupting their flow.

Finally, a big mistake we made in terms of marketing and communication happened during our pivot last year. We were really afraid of losing all our active users (but when you pivot that’s ultimately what is likely to happen). We communicated our pivot trying to convince them that we had done this for them and that the new product would fit their workflow. This generated a lot of backlash as many users felt like we had not heard them at all (what they wanted was a chat aggregator, not go back to the browser!). We’ve edited our communication after that episode and didn’t try so hard to convince our users that it was the right solution for them. If you pivot to build something fairly different from what you did before, chances are you’ll disappoint some people. That’s ok, just don’t lie to yourself about it.

Our latest favorite tools include:

As for working methodologies, I’d encourage anyone to read How Superhuman Built an Engine to Find Product/Market Fit. It is filled with great insights and actionable advice.

Feel free to check out what we’ve built at Station or to read a more detailed account of our pivot in this blog post.