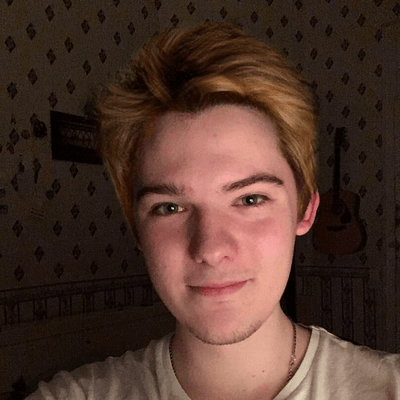 Inspired by the iOS app Launchpad, Miloslav Voloskov started drafting ideas to what eventually was called Thepresence. This aimed to provide a more modern and unconventional take on website builders. But this venture got shut down even before it was able to take off. A mental illness shutting down a business that could have changed the drag-and-drop website builder game? It’s more likely than you think.

Hi Miloslav! What's your background, and what are you currently working on?

Hello! I’m a developer and article writer from Saint-Petersburg, Russia. I’m 22 years old. I’ve previously built The Code of Conduct Generator (Product of the Day) and Sleeep (Golden Kitty Award nominee in Health & Fitness). I also wrote an article about architecture which was included in dev.to weekly must-read and brought me a dev.to Top 7 badge.

Thepresence was a website builder. Its purpose was to allow people to build websites from blocks without much effort, and the end result should’ve looked like something you can see on Awwwards. Thepresence should’ve been a subscription-based product at $28 a month.

I wanted to build it all alone, but later I hired a graphic designer.

What motivated you to start Thepresence?

I saw the Launchpad iOS app that allows people to create music. As I tried it, I saw an interesting pattern – even if I close my eyes and just tap the tiles in the app randomly, a pretty listenable music was coming out.

I love and collect great graphic design examples and websites, but I always thought that you need to be talented to create a website that would be this good. But what if I could design great, modern website blocks and allow people to create websites with them, just like what Launchpad app does with pre-recorded samples? No matter if you are talented or not, just a random sequence of such blocks would come out as a modern website with a striking design.

I saw the success of Designmodo as they did the same thing, but I wanted to do this differently. Instead of focusing on conventional design trends that would appeal to the general public, I wanted to focus on freelancers and design geeks who seem to prefer a more modern, unconventional, experimental design. This is already a huge trend in the graphic design community led by freelancers you can see on Awwwards and Instagram.

Experimental typefaces, glittery 3D-models, visual glitches, and overall modernism – right there, at your fingertips. Thepresence should’ve been just that, allowing you to build a website just like those which you saw and liked but never knew how to design.

Initially, Thepresence description called Project Orca was written in 2018 and featured much more than just the website builder – there was the blog module, the e-shop functionality, and even the opt-out hub where all the published content of all Orca-powered websites should’ve been displayed.

I saw that YCombinator was accepting ideas and I decided to submit mine. Either because I had no previous experience with how to make your submission attractive or the initial idea wasn’t good enough, my submission was canceled. I wasn’t worried about that because I was submitting it as an experiment, just to see what happened.

I decided to build it myself then. I read The Lean Startup and decide that it was better to strip the idea down but actually ship it than eventually face the fact that I alone couldn’t build such a complex product. So I reduce the functionalities to just the static website builder with blocks that allowed publishing the website with a custom domain name. Later on, I decided to reduce it even further to just the HTML exporting.

All the products I’ve launched were built by just me, so I decided to design everything myself. I took the design courses by Calarts and got some practice designing sample mockups. Later, as I was browsing Awwwards for design ideas for the blocks, I realized that I only had the experience to copy them at best, but not to fuse the ideas I was seeing into universal blocks that could be put together in arbitrary order and still work as a website.

Maybe this time I should hire someone. I have a friend who is a great graphic designer and he also prefers modernist design language. I saw a fit and hired him. I had the experience of working as a team leader, so I knew how to manage the process to make the whole experience not frustrating for the designer.

At this time both my depression and a so-called treatment with neuroleptics made the further work process impossible. I abandoned this project and quit my actual job.

I was working with Alexander Isora who made The Unicorn Platform and successfully maintains it as his main job. He shared some useful insights and connections to help my product gain the initial momentum when it launched. He was the one who taught me how to launch properly. I used what I learned from his tactics and it worked perfectly with what I built before.

I was aware that Thepresence is a niche product and shouldn’t be targeted to the general audience. I wasn’t trying to change the whole industry, I just wanted to build the first project that I could monetize.

You can’t truly focus when you’re trying to satisfy everyone. So instead of doing that, I decided to focus on a small but loyal auditory and its needs. I wasn’t looking to build a Squarespace killer but a product that my auditory wanted to stay with. I wanted it to be shared among their friends as an insight, a tool that isn’t for everyone.

For the pricing, I decided to pick a market average value of $28 a month. Not so cheap that it doesn’t feel premium but not so expensive that it raises expectations that the product is unable to meet.

Which were the causes of Thepresence failure?

I was caught in a downward spiral of irrational guilt which you can’t fight by yourself. It’s just there and there are no arguments or reasoning to break it. I can code and I have the experience of building an entire complex product alone for the company and refactoring legacy code that makes no sense, but then I had sleep problems and was just sitting there, trying to implement the simplest authorization and failing. I could build such a thing in like half an hour, but when you’re depressed, it just doesn’t work. You can see the different letters of code on your screen but you can’t read it, you just don’t understand what’s going on in the code you just wrote. Examples on GitHub don’t help either as you are unable to comprehend them.

Receiving every new block from a designer was a nightmare. No matter if it was actually great or not, voices in my head were already shaming me as if my product was already released and failed miserably. I was seeing nightmares about tens of thousands of downvotes on my release page with comments that shamed me. I was seeing that I came to the job interview later and they just laughed at me for my failed product.

The power of will can do nothing with depression. It’s caused by a chemical imbalance inside your brain, so there’s no thought process you can establish to escape such a state. Existing medical treatment strategies weren't effective enough in my case, so I’m still on my therapy.

As I was unable to complete the product, I decided that it’s better to write a story about it and end it all rather than to continue the fight I couldn’t win. Several of my friends also have depression and are trying to build their products so at least my story could be useful.

As I published the story, I felt relieved. This was a great experience and I have no regrets.

It’s hard to think of mistakes of a product that was never launched and was shut down at the early stage of development. As I’ve never monetized my products before, I think my main marketing mistakes were ahead, never actually destined to happen.

The main challenge was making my product not generic, a point where it would be impossible to compete with other mature products that had more functionalities because of the years spent building them, better marketing budgets, and experts.

I think my main mistake was realizing that I was unable to continue but still deciding to proceed. It cost me two years but as I have a habit of celebrating my mistakes and turning them into advantages, I learned a lot and it all made a great story.

As I didn’t actually launch the product and thus spent nothing on marketing, my expenses were just below a thousand dollars. In terms of money, I lost almost nothing.

Of course, I wouldn’t submit it to YCombinator. I wouldn’t start over with a complex idea and eventually reduce it. The only thing I achieved building Thepresence is probably a finished simple idea of what this product should be.

With that idea, if I heal completely and want to do it all again, I would do just the same thing. I still see Thepresence as a great product. If someone builds it before I do, I still would’ve used it.

The Code Complete is a book that allowed me to code fast and create a code that would do the job. I think it’s important to not get caught in an unproductive process of rethinking the code over and over with the sole purpose of using the bleeding-edge technology. The Duct Tape Programmer is a great article about that. The Lean Startup explains just the same way of building products but focuses on entrepreneurship rather than coding.

Dev.to is my go-to resource to publish my article. I like the feedback that other writers give me, especially on architecture patterns I propose.

DevRant is where I often write my thoughts as I don’t use Twitter. There are many experienced developers there, and this community is far more welcoming than StackOverflow. The feedback you receive on just one post can teach you a lot and later save months of time you might have spent on trying useless concepts.

You can read the full story on thepresence.io.