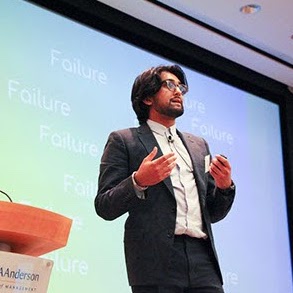 Zapstream was a social live streaming platform, which competed with Meerkat and Periscope. The startup raised $1m from angels and grew from 0 to 100k users. However, a combination of dwindling engagement, mismanagement of money, and the inability to fundraise further, led to their shut down.

Hi Devan! What's your background, and what are you currently working on?

👋🏾 Hey! My name is Devan, I’m a first generation American with family from India, I’m twenty-three as of writing this and I grew up in LA. I started a fashion brand at fifteen and ran it for almost three years, then I co-founded a tech startup called Zapstream, and finally I attended Babson College. These days I run a growth agency for startups called 96, I lecture at high schools on what I call “Teentrepreneurship,” and I’m a proud board member at Project ECHO, a non-profit organization that brings entrepreneurial concepts into underserved high schools.

As mentioned, Zapstream was my first tech startup. Founded in Q1 ‘15, Zapstream was a social live streaming platform with live effects. We launched around the same time as and competed with Meerkat, which is now Houseparty, and Periscope, which was then bought and re-launched by Twitter. Keep reading to hear how we got all the way to 100k users but failed to take it to the next level.

What motivated you to start Zapstream?

The story is a little long, but here’s the short version. Social media was my first love. I fell in love with Snapchat as an 8th grader, I must’ve been one of the first few thousand users. It totally changed my social life and even how I thought about marketing later on. I made new friends, made other relationships much stronger, and even got into a romantic relationship, all because of social media before 10th grade.

In February of ‘15 I consulted for a company called onLoop, a messaging platform founded by a forty-something year old that was targeting high schoolers and college students. He had raised a little over $1m and had a full team of eleven including a full time CTO and three other engineers. However, within four weeks I told him with his poor engagement metrics there was no possibility to scale economically and raise money, but he knew it wasn’t going well and already wanted to pivot. He wanted to build a live streaming platform because live video was the most popular tool used in onLoop. I agreed it could be a great idea and he challenged me to come up with a fully fledged idea by the following Monday. I then pitched him my idea, the name Zapstream and all the features it would include, I even made some sketches with some preliminary ideas. They loved it, started to build it in March, and offered me a full time position out of high school as the Chief Marketing Officer.

The onLoop resources were pivoted to Zapstream and technical team got to work quickly. The CEO raised another ~$250k from angels in his network and the whole team moved to work on Zapstream. There was no UI designer at the time, so the technical team was forced to design it too, but they designed and built a fully functioning app in ~2 months. We got the app up and running in what felt like no time, but it wasn’t very nice-looking, likely because it was designed by some older engineers. The technical aspect, which usually is the hardest gap to fill, felt like no obstacle at all.

In a short time we built a live streaming app that worked with custom color filters. The big feature that differentiated us were “Zaps,” which evolved over time. First Zaps started out as a broadcaster-selected 15-second snippet of the live stream that stayed native to the platform. What we quickly found was that live creators didn’t want to spend additional time creating a snippet, it was too burdensome. So, after a few weeks, we pivoted Zaps to be viewer-generated GIFs that stayed native in a gallery after the stream was finished. Viewer-generated GIFs were huge, instantly we saw the number of Zaps created skyrocket.

This was my first time building a full campaign for a technology company, a free mobile app nonetheless, and it was definitely intimidating. We tried a few different strategies, but as a lover of social media I knew that we needed to find a way to harness the power of virality on other social platforms. After lots of testing and iterating, we ended up finding influencers to be the most economical method to grow.

Once we figured out the right features, we decided to “relaunch” with an ambitious plan. We teamed up with Jake Paul who was at the time just starting to figure out the business model for his new venture, Team10. Jake and I met at a coffee shop in Beverly Hills, talked for a little under an hour and closed on a deal. If Jake produced over X downloads, he would vest up to Y% of the company’s total equity (and I think a small cash component too). Unfortunately, Jake bailed on the deal after producing a mere 1200 downloads, though we learned good lessons about working with influencers.

Soon after, I created a model that would estimate the number of downloads an influencer would bring in based on their public social media metrics, and we picked ~30 smaller Vine and Instagram influencers using that model. We paid over $60k out to influencers alone, but drove over 75k downloads using this strategy.

We were written about on multiple websites and I even got to appear on Fox Business.

Which were the causes of Zapstream failure?

The Zapstream product was solid and growing, but we faced fierce competitors. Meerkat had just launched, Periscope was relaunched by Twitter, and Facebook Live soft launched with celebrities. The combination of dwindling engagement, mismanagement of money, and our inability to fundraise further led to a painful and very prompt end to Zapstream. One day we were growing like crazy and everything was great, a week later the company was forced to shut down because the team couldn’t be paid. It was extremely painful to let Zapstream die like that, but revealed valuable lessons about management.

Team - When I first got there, the team was men with an average age of 38. They didn’t truly understand social platforms, they barely had a Facebook, but they understood the value in network effects and were able to pay to build a platform. Generally, this team wasn’t a good fit for the product.

Product - The product was good, but it wasn’t great. It was a social platform for young millennials that was designed by “boomer” technologists. Had the product been designed by the people who might use it, it might’ve been more engaging. Later at Zapstream we brought on a very talented designer to redesign the platform, but, unfortunately, her UI barely saw the light of day.

Fundraising - This was the biggest hitch. Because of the other two problems, fundraising was already tough. With the fundraise we may have been able to amend the product and team, but without it we were dead in the water. We had raised ~$1m for Zapstream from angels and the network of the CEO, so understandably he wanted to raise ~$4m at a much higher valuation. To all the serious investors we talked with, the valuation we were seeking was just too high, and we failed to raise any money because the CEO wouldn’t lower it. Big lesson learned.

The biggest mistake I made was not speaking up and being more vocal. I knew the team wasn’t right, I knew the product wasn’t incredible, but at the time I was extremely unfamiliar with the fundraising process. I truly believe if we raised $1-2m from an institution then we could’ve taken on Periscope, but we played a binary game and lost. Even more unfortunately, I did not overcome my inability to speak up in time, and Zapstream came to a slow and painful end.

All in all, we spent the entire $1m+ without earning a single dollar in revenue. Most of the spend came down to the full time engineering team, supporting other team members, office and equipment, and lots of 3rd party services.

If I tried to start over I would do almost the exact opposite of what we did. I’m a strong believer that the best way to build a consumer product is to create something fun and iterate according to user feedback. Starting from the beginning, I’d start with a paper + pen prototype, then finalize UI in Figma, then create a prototype that I can send out (also in Figma), then create the core MVP and build a beta list of <1000 users. Once you have beta users, pay close attention to their feedback, explore user flows and understand what’s working and what’s not. Make sure you’re not throwing extra money around, spend as little as possible to validate your product.

I still think the Zapstream concept is superior to the other live video products out there. That designer we hired and I are still good friends, just the other day we were joking about how incredible Zapstream could’ve been during the Covid-19 pandemic. Our vision was to take live interaction to the next level, including multiplayer games and fun reasons to go live. There’s definitely still space for that.

I’m going to start updating this with older resources too, so stay up to date with my list here.

These days I’m helping startups with growth at my firm, 96. You can also find me on my personal site here, my semi-random thoughts here, and some side projects here. Also follow me on Instagram and Twitter, or basically anywhere @DevanSood. Reach out any time, I’d love to help however I can. -- DS at Devan Sood (dot) com -- 😊